Many people consider the 80s the best decade in music. Numerous bands that did well in the 80s are still popular today. Here are five of the best 80s bands that are going strong even in 2020. 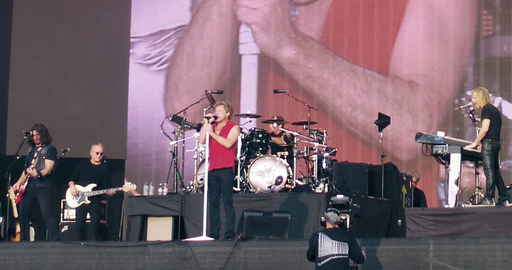 Bon Jovi had several hit songs in the 80s, including “Bad Medicine,” “You Give Love a Bad Name,” “Livin’ on a Prayer,” “Lay Your Hands on Me” and “Runaway.” In 2018, the band made it into the Rock and Roll Hall of Fame. They have also sold over 100 million records worldwide. Bon Jovi’s albums continue to chart well. Burning Bridges, released in 2015, ranked No. 3 on the US Top Rock Albums, No. 13 on Billboard 200, No. 3 on UK Albums and No. 1 on German Albums. The band’s next album is set for an early 2020 release.

Some of Metallica’s hit songs in the 80s were “One,” “For Whom the Bell Tolls” and “Fade to Black.” Metallica has over 125 million record sales and nine Grammy Awards. Many of their albums have ranked No. 1 on the Billboard 200, such as Hardwired… to Self-Destruct, Death Magnetic, St. Anger and Reload. Metallica made it into the Rock and Roll Hall of Fame in 2009. They continue to hold concerts and go on tour. Their eleventh studio album is expected to be released in 2020. Metallica is also going on tour in South America in 2020. They hope to hold concerts in Australia and New Zealand in 2020 too.

In 2019, Radiohead was inducted into the Rock and Roll Hall of Fame. Some of their most successful albums are Kid A, OK Computer, Pablo Honey and In Rainbows. Rolling Stone, The Times and Pitchfork recognized Kid A as the best album of its decade. “Creep” reached No. 2 on US Alternative Songs, No. 7 on UK Singles and No. 6 on the AR1A Chart. They have over 30 million worldwide record sales and won Best Alternative Music Album three times at the Grammy Awards. Their most recent album A Moon Shaped Pool was released in 2016 and ranked No. 3 on the Billboard 200, No. 1 on UK Albums, No. 1 on US Top Rock Albums and No. 2 on Australian Albums. Radiohead continues to go on tour around the world, including Europe, South America, Japan and North America.

Def Leppard’s 80s hit songs include “Pour Some Sugar on Me,” “Love Bites,” “Animal” and “Bringin’ on the Heartbreak.” Pyromania was certified diamond in the US. Hysteria, released in 1987, has been certified 12x platinum in the US and sold over 25 million copies around the world. Overall, the band has sold more than 100 million records worldwide. In 2019, Def Leppard was added to the Rock and Roll Hall of Fame. The band continues to stay active going on tours and releasing new music. In 2019, Def Leppard went on a world tour. Their most recent studio album Def Leppard was released in 2015.

These five bands are some of the best 80s bands that are still popular today. They continue to go on tours and work on new music. All of them have sold a significant number of worldwide records and have been inducted in the coveted Rock and Roll Hall of Fame.

Have you ever confidently tried to search for a song online only to find it doesn’t actually exist, at least not by the name you’re searching for? We’ve all fallen victim to the name games of artists who choose to name their songs something other than the phrase everyone remembers.

We’ve created this list of commonly mistaken song titles to keep you in the know and dazzling at trivia night.

This Steve Winwood classic is actually called “Valerie”. As he croons, “Valerie, call on me” it’s easy to see why someone would drop the “Valerie” or at least expect “call on me” to be somewhere in the title.

The predecessor of “The Chipmunk Song”, “Gangnam Style” and all the other viral songs we’re embarrassed to admit we listened to over and over again, “Numa Numa” is actually named “Dragostea Din Tei”. Moldovan pop group O-Zone would probably understand why the name didn’t quite catch on worldwide.

8. Take Me to the Place I Love

The Red Hot Chili Peppers’ only friend, the city of angles. Singing about LA affectionately throughout the song, they ask to be taken to the place they love throughout the song. It’s understandable why we’ve forgotten over the years that the song is actually known as “Under the Bridge”.

This pub classic by The Proclaimers is likely to get everyone shouting about how they would walk 500 miles, and how they would walk another 500 more after. It’s no surprise listeners were shocked to realize the actual name of the song to be the slightly less catchy “I’m Gonna Be (500 Miles)”.

Barbra Sreisand does croon about memories about “The Way We Were” during the song, but drops the “memories” part in the official title of the song. She does talk about the smiles that made up the way they were throughout the song, so we can allow the song is technically about more than just memories.

The Who released an anthem for disenfranchised teenagers everywhere when they released “Baba O’Riley”, perhaps not expecting the idea that it would be known as “Teenage Wasteland” until the end of time.

AS the 4 Non Blondes continually ask “what’s going on?” throughout the song, it’s easy to see why one would expect that to translate to the song title – except the song is actually called “What’s Up?” It’s speculated the group wanted to avoid confusion, as Marvin Gaye already had a song called “What’s Going On?” but we have to say, we’re still confused.

It’s honestly pretty acceptable to request “I Like Big Butts”. Everyone knows what you’re talking about, and it’s what comes to mind immediately when thinking about Sir Mix-A-Lot’s classic ode to the posterior “Baby Got Back”.

Rupert Holmes’s originally titled “Escape” became so synonymous with Piña Coladas after the song’s release that he actually had to rename the song to “Escape (The Piña Colada Song)”. If you like Piña Coladas, you’ll know exactly what song we’re talking about either way.

1. I Get Knocked Down

Perhaps the kings of names that stick out like a sore thumb, Chumbawumba did us all dirty when they named the song we almost all colloquially know as “I Get Knocked Down” or “I Get Up Again”. Instead of going for the obvious, the band stuck with their offbeat naming conventions and went with “Tubthumping”.

Welcome to WordPress. This is your first post. Edit or delete it, then start writing!